Java garbage collection is an automatic process to manage the runtime memory used by programs. By doing it automatic JVM relieves the programmer of the overhead of assigning and freeing up memory resources in a program.

Though this request mechanism provides an opportunity for the programmer to initiate the process but the onus is on the JVM. It can choose to reject the request and so it is not guaranteed that these calls will do the garbage collection. This decision is taken by the JVM based on the eden space availability in heap memory. The JVM specification leaves this choice to the implementation and so these details are implementation specific.

Undoubtedly we know that the garbage collection process cannot be forced. I just found out a scenario when invoking System.gc() makes sense. Just go through this article to know about this corner case when System.gc() invocation is applicable.

Garbage collection is the process of reclaiming the unused memory space and making it available for the future instances. 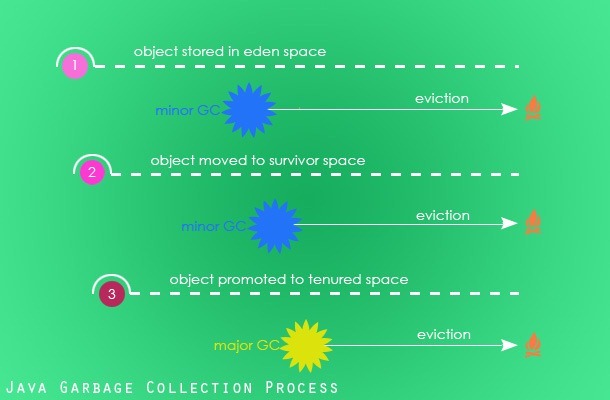 Eden Space: When an instance is created, it is first stored in the eden space in young generation of heap memory area.

NOTE: If you couldn’t understand any of these words, I recommend you to go through the garbage collection introduction tutorial which goes through the memory mode, JVM architecture and these terminologies in detail.

Survivor Space (S0 and S1): As part of the minor garbage collection cycle, objects that are live (which is still referenced) are moved to survivor space S0 from eden space. Similarly the garbage collector scans S0 and moves the live instances to S1.

Instances that are not live (dereferenced) are marked for garbage collection. Depending on the garbage collector (there are four types of garbage collectors available and we will see about them in the next tutorial) chosen either the marked instances will be removed from memory on the go or the eviction process will be done in a separate process.

Old Generation: Old or tenured generation is the second logical part of the heap memory. When the garbage collector does the minor GC cycle, instances that are still live in the S1 survivor space will be promoted to the old generation. Objects that are dereferenced in the S1 space is marked for eviction.

Memory Fragmentation: Once the instances are deleted from the heap memory the location becomes empty and becomes available for future allocation of live instances. These empty spaces will be fragmented across the memory area. For quicker allocation of the instance it should be defragmented. Based on the choice of the garbage collector, the reclaimed memory area will either be compacted on the go or will be done in a separate pass of the GC.

Finalization of Instances in Garbage Collection

Just before evicting an instance and reclaiming the memory space, the Java garbage collector invokes the finalize() method of the respective instance so that the instance will get a chance to free up any resources held by it. Though there is a guarantee that the finalize() will be invoked before reclaiming the memory space, there is no order or time specified. The order between multiple instances cannot be predetermined, they can even happen in parallel. Programs should not pre-mediate an order between instances and reclaim resources using the finalize() method.

When an object becomes eligible for garbage collection?

There are different types of references in Java. Instances eligibility for garbage collection depends on the type of reference it has.

During compilation process as an optimization technique the Java compiler can choose to assign null value to an instance, so that it marks that instance can be evicted.

In the above class, lion instance is never uses beyond the instantiation line. So the Java compiler as an optimzation measure can assign lion = null just after the instantiation line. So, even before SOP’s output, the finalizer can print ‘Rest in Peace!’. We cannot prove this deterministically as it depends on the JVM implementation and memory used at runtime. But there is one learning, compiler can choose to free instances earlier in a program if it sees that it is referenced no more in the future.

Garbage collection does not guarantee safety from out of memory issues. Mindless code will lead us to OutOfMemoryError.

Comments are closed for "How Java Garbage Collection Works?".