Then what is the use of java weak reference? Let us see an example scenario, which will help us understand the problem in detail. Before that, we should be aware there are four types of references in java and they are strong reference, weak reference, soft reference and phantom reference.

When there are one or more reference to an object it will not be garbage collected in Java. But this rule depends on what type of reference it is. If an object has only weak reference associated with other objects, then it is a valid candidate for garbage collection.

Let us take a sample scenario to understand it better. Let TextView be an object (recently programming in Android and so using its class for example :-)) and we will have program generated ids used for its identification. These ids are used in some other object for referencing the TextViews.

Key is TextView object and value is the Id. Now, during the execution of the program we have removed a TextView object say textView1. We do not require that view object so we have made it null. Now, what will happen to the key-value pair(textView1, iD1) stored in HashMap. This pair as of now makes no sense and it is not required as that textview itself is null.

So, programmatic we need to ensure that, when a textView is removed then its corresponding entry in the map should be removed. Only then, that object becomes a candidate for garbage collection. Otherwise, even though it is not used at run-time, this stale object will not be garbage collected.

There is a predefined Map which uses weak reference. This is an implementation of Map interface and exactly same as HashMap but with only difference of weakrefernce. Key-value pairs extext WeakReference class.

In WeakHashMap there is a private method name expungeStaleEntires(), which is used to remove stale entries as given in above scenario. This method is internally used before get/getEntry/put/resize/size /…. all methods. Only after expunge done the regular operation is done. It just makes a stale entry ‘null’ and releases it for garbage collection. You may read its source code for more detail. 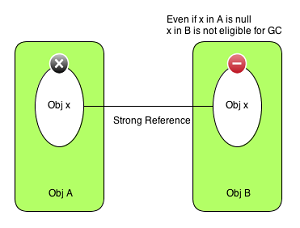 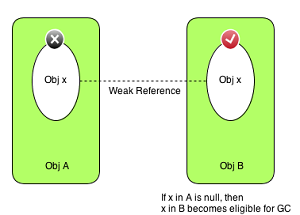 Types of References in Java

There are four types of references in Java,

above is listed in the same order as their strength. 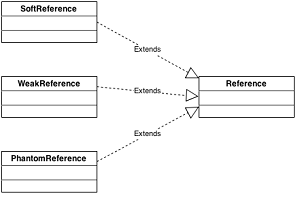