To extend or modify the behaviour of ‘an instance’ at runtime decorator design pattern is used. Inheritance is used to extend the abilities of ‘a class’. Unlike inheritance, you can choose any single object of a class and modify its behaviour leaving the other instances unmodified.

In implementing the decorator pattern you construct a wrapper around an object by extending its behavior. The wrapper will do its job before or after and delegate the call to the wrapped instance. 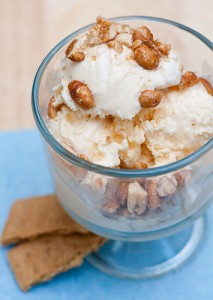 You start with an interface which creates a blue print for the class which will have decorators. Then implement that interface with basic functionalities. Till now we have got an interface and an implementation concrete class. Create an abstract class that contains (aggregation relationship) an attribute type of the interface. The constructor of this class assigns the interface type instance to that attribute. This class is the decorator base class. Now you can extend this class and create as many concrete decorator classes. The concrete decorator class will add its own methods. After / before executing its own method the concrete decorator will call the base instance’s method. Key to this decorator design pattern is the binding of method and the base instance happens at runtime based on the object passed as parameter to the constructor. Thus dynamically customizing the behavior of that specific instance alone. 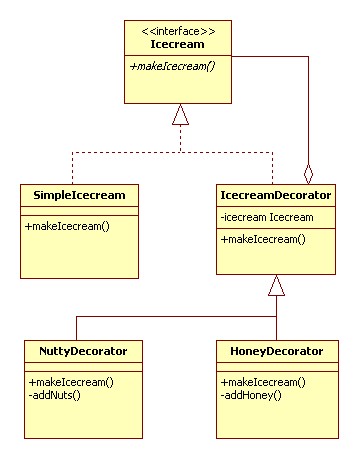 The above is an interface depicting an icecream. I have kept things as simple as possible so that the focus will be on understanding the design pattern. Following class is a concrete implementation of this interface. This is the base class on which the decorators will be added.

Following class is the decorator class. It is the core of the decorator design pattern. It contains an attribute for the type of interface. Instance is assigned dynamically at the creation of decorator using its constructor. Once assigned that instance method will be invoked.

Following two classes are similar. These are two decorators, concrete class implementing the abstract decorator. When the decorator is created the base instance is passed using the constructor and is assigned to the super class. In the makeIcecream method we call the base method followed by its own method addNuts(). This addNuts() extends the behavior by adding its own steps.

Execution of the decorator pattern

I have created a simple icecream and decorated that with nuts and on top of it with honey. We can use as many decorators in any order we want. This excellent flexibility and changing the behaviour of an instance of our choice at runtime is the main advantage of the decorator design pattern.

The above readers of java API are designed using decorator design pattern.