Java Pass By Value and Pass By Reference

Let us understand what is pass by value. Actual parameter expressions that are passed to a method are evaluated and a value is derived. Then this value is stored in a location and then it becomes the formal parameter to the invoked method. This mechanism is called pass by value and Java uses it.

In Java Language Specification 8.4.1. Formal Parameters section it is stated that,

Test Pass by Value vs Pass by Reference

Objects are not swapped because Java uses pass by value.

Same code will swap the objects in C++ since it uses pass by reference.

Does Java Passes the Reference?

Everything is simple and then why is this topic so hot? Now let us look at the following code where we able to change the property of a passed argument object inside a method and it gets reflected in the actual argument.

Following figures explains method scope for variables with respect to call by value. Consider the numbers 100, 200, 600 and 700 as pointers to memory location, these are logical only and for your understanding. 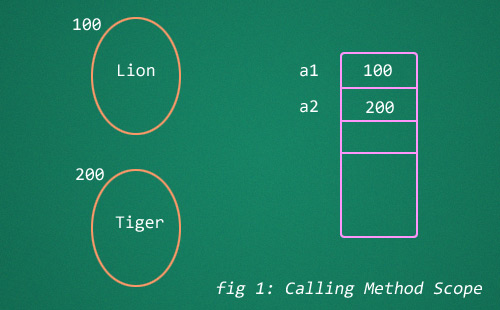 In figure 1, there are two objects with variable name a1, a2 which references the location 100 and 200 respectively. 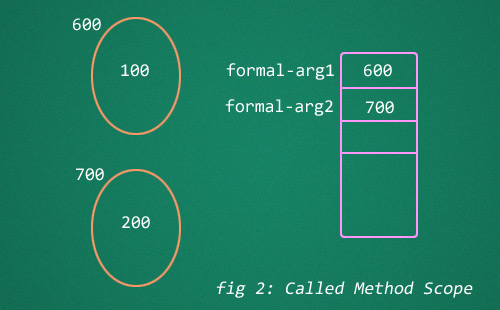 In figure 2, there are two objects named formal-arg1, formal-arg2 which references location 600 and 700 respectively. Here is the catch, contents of the location 600, 700 are again references to another location 100 and 200. So the called method has got the reference of the passed arguments. Using the reference it can manipulate only the contents of the actual argument object. But it cannot change the fact that a1 points to 100 and a2 points to 200, that’s what we are trying to do when we swap the objects.

Important point to note is that “the reference is copied as a value” to a new variable and it is given as formal parameter to the called method. It does not get a1 variable which is the actual argument in scope. This is the key difference between pass by value and pass by reference.

Comments on "Java Pass By Value and Pass By Reference"

Comments are closed for "Java Pass By Value and Pass By Reference".