This Java tutorial is to give an introduction to the Stream API which is one of the core features of Java 8.

Pipelines and streams are introduced in Java SE 8 and it enriches the Java collections API. Java Stream API package is to support functional style operations such as map-reduce transformations on collections. At the heart of this package is “Stream”. Understanding Lambda expressions is a prerequisite to go through this Java Stream API tutorial.

Stream is a sequence of elements supporting sequential and parallel aggregate operations.

Stream is not a data type or a collection by itself. Sequence of elements are created out of a source, like a collection object, and transformed using different operations connected as pipelines and ends with a final operation. 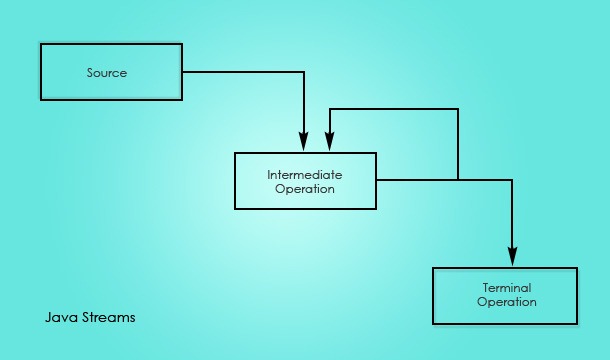 Source – is an entity that stores or generates data. For example, it can be a collection or a random number generator.

Stream – So the stream starts from a source and followed by one or more intermediate operations and ends with a terminal operation.

As stated above, Java stream operation are of two types intermediate and terminal. The intermediate operations are classified as stateful or stateless based on their ability to process elements independently. 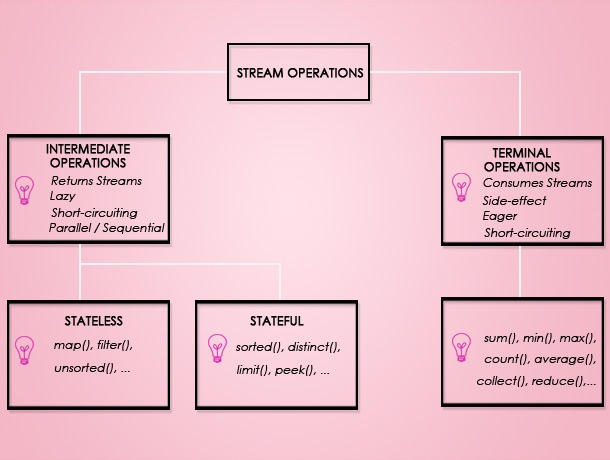 are stateless intermediate operations. Every individual element can be processed without the need for sharing information between them for processing.

etc are known as stateful operations. Because elements cannot be processed individually, they need to be compared with one another thus requiring information to be retained.

Terminal operations consumes the stream pipeline. It does not produce another stream like intermediate operations. It produces a result or a side-effect.

Following are some of the available terminal operations in the API,

Once the terminal operation completes execution, then the stream is completed and it cannot be used further. If there is a need to use similar stream, then a new stream should be created. This is similar to the concept of iteration using Iterable interface.

Execution of a code block in terminal operation is a side-effect. This should be used with care as it can affect the stateful nature of a intermediate operation. Operations like forEach() and peek() can only be executed using a side-effect. It can be useful for simple System.out.println for debugging small Java programs. The code block at the start of this tutorial is an example for side-effect.

Order of the elements processed in an operation depends on the source in a Java stream. For example, in a sequential stream for java.util.List the order will be maintained. But in the case of Map it need not be maintained.

In the next Java tutorial, we will go to the next level in Java streams API.