A factory method pattern is a creational pattern. It is used to instantiate an object from one among a set of classes based on a logic.

Assume that you have a set of classes which extends a common super class or interface. Now you will create a concrete class with a method which accepts one or more arguments. This method is our factory method. What it does is, based on the arguments passed factory method does logical operations and decides on which sub class to instantiate. This factory method will have the super class as its return type. So that, you can program for the interface and not for the implementation. This is all about factory method design pattern.

For a reference of how the factory method design pattern is implemented in Java, you can have a look at SAXParserFactory. It is a factory class which can be used to intantiate SAX based parsers to pares XML. The method newInstance is the factory method which instantiates the sax parsers based on some predefined logic.

Block diagram for The Design Pattern 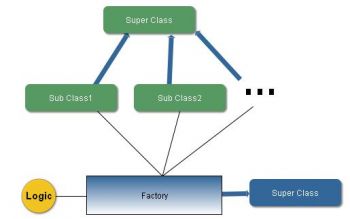 Based on comments received from users, I try to keep my sample java source code as simple as possible for a novice to understand.

Using the factory method to instantiate

Output of the above sample program for Factory Method Pattern