I wish this tutorial will help address the following,

Polymorphism in computer science was introduced in 1967 by Christopher Strachey. Please let me know with reference if it is not a fact and the tutorial can be updated. Following are the two major types of polymorphism as defined by Strachey.

Later these were further categorized as below: 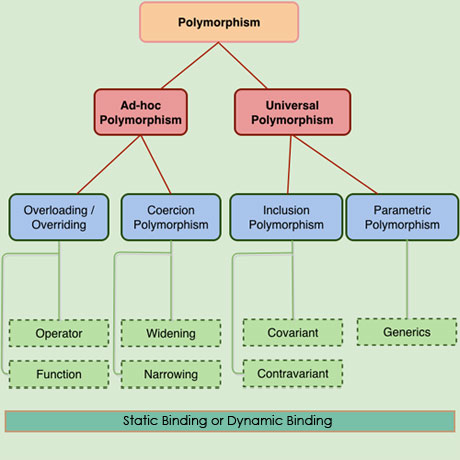 If we want to say the above paragraph in two words, they are operator overloading and function overloading. Determining the operation of a function based on the arguments passed.

In Java we have function overloading and we do not have operator overloading. Yes we have “+” operator implemented in a polymorphic way.

The definition is when the type is different, the internal function adjusts itself accordingly. int and float are different types and so even the following can be included in polymorphism operator overloading.

Similarly even * and / can be considered as overloaded for int and float types.

Having said all the above, these are all language implemented features. Developers cannot custom overload an operator. So answer for the question, “does Java supports operator overloading?” is “yes and no”.

In inheritance, the ability to replace an inherited method in the subclass by providing a different implementation is overriding. Function overriding in is discussed in the same tutorial as overloading.

Polymorphism is a larger concept which consists of all these different types. So it is not right to say that overloading or overriding alone is polymorphism. It is more than that.

Now with this definition, let us see if Java has coercion polymorphism. The answer is half yes. Java supports widening type conversion and not narrowing conversions.

Java does not support narrowing conversion and we will get error as "FToC.java:7: fToC(int) in FToC cannot be applied to (double)"

The above code will work without an error in Java. We are passing an int value ’98’ wherein the expected value type is a float. Java implicitly converts int value to float and it supports widening conversion.

Substitutability was introduced by eminent Barbara Liskov and Jeannette Wing. It is also called as Liskov substitution principle.

“Let T be a super type and S be its subtype (parent and child class). Then, instances (objects) of T can be substituted with instances of S.”

Here we go, we have come to ‘Generics’. This is a nice topic and requires a full detailed tutorial with respect to Java. For now, parametric polymorphism is the ability to define functions and types in a generic way so that it works based on the parameter passed at runtime. All this is done without compromising type-safety.

The following source code demonstrates a generics feature of Java. It gives the ability to define a class and parameterize the type involved. The behavior of  the class is based on the parameter type passed when it is instantiated.

Comments are closed for "Java Polymorphism".