In Java NIO, channels are used for I/O transfers. Channel is a like a tube that transports data between a buffer and an entity at other end. A channel reads data from an entity and places it in buffer blocks for consumption. Similarly, we should write to buffer blocks and that data will be transported by the channel to the other end.

Channels are the gateway provided by Java NIO to access the native I/O mechanism. We should use buffers to interact with the channels, so the channel is like a bridge between two entities to do the I/O. Buffers are the endpoints provided by channels to send and receive data. 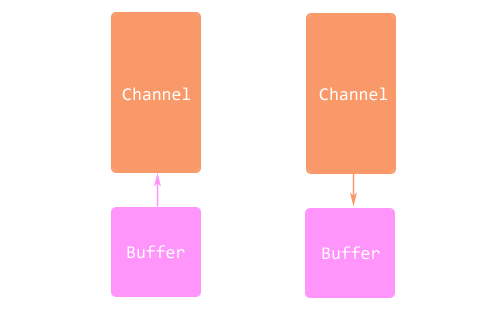 Following are the two major types of Channels classes provided as implementation in Java NIO package.

Following example reads from a text file and prints the content to the console. We have used RandomAccessFile and FileChannel to read the file into a ByteBuffer. We read 512 bytes of data into buffer then invoke flip method to make it ready for the get operation. On get we print the content to console the clear the buffer to keep it ready for the next sequence of read. This keeps on continuing until the end of file.

We can see about NIO Buffer and each of these Channel classes in the coming tutorial.