In this tutorial let us discuss about different aspects of type cast with respect to Java generics. Generics was initially idealized for collections framework. In collections there were lots of cast done. In a way, one of the main objective of Java generics is to help programmer reduce explicit type cast and provide type-safety.

Before diving into detail it is better for you to go through the fundamentals of cast in Java. This is tutorial is a part of multi-part series on Java generics. Hope you are comfortable on Java generics basics.

So once this replacement is done, when a method call returns a type parameter, it will obviously return a supertype wherein the expectation will be a specific subtype. So in such places, compiler will explicitly add a cast. Have a look at the following example code and it will help understand this.

Above generic type and the class that uses it will be transformed as below by the Java compiler during type erasure. 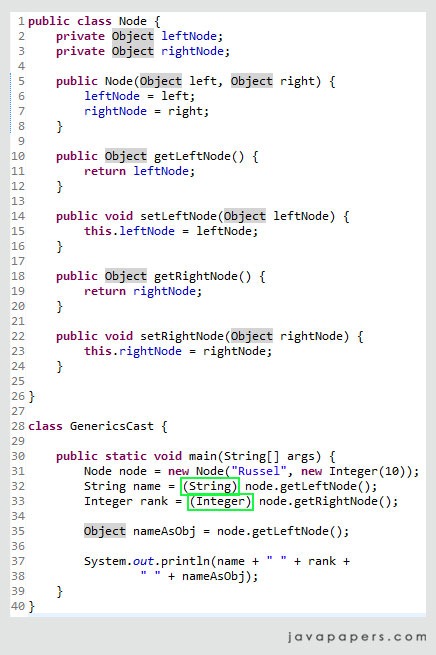 So how to identify where the Java compiler will add a cast. During type erasure, if the return type of a method is changed, then mark those methods. Then every place where those methods are invoked should have a cast added. If the argument of a method is changed by type erasure, then it does not matter. Since the argument will be a super type and it can always accept its subtype.

Comments on "Cast in Java Generics"

Comments are closed for "Cast in Java Generics".