Hashtable is an implementation of a key-value pair data structure in java. You can store and retrieve a ‘value’ using a ‘key’ and it is an identifier of the value stored. It is obvious that the ‘key’ should be unique.

java.util.Hashtable extends Dictionary and implements Map. Objects with non-null value can be used as a key or value. Key of the Hashtable must implement hashcode() and equals() methods. By the end of this article you will find out the reason behind this condition. 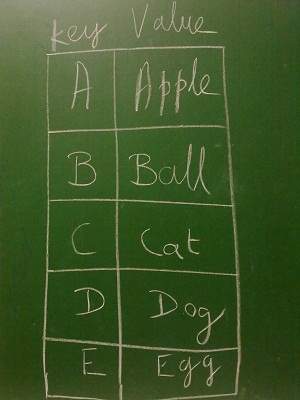 Generally a Hashtable in java is created using the empty constructor Hashtable(). Which is a poor decision and an often repeated mistake. Hashtable has two other constructors

. Initial capacity is number of buckets created at the time of Hashtable instantiation. Bucket is a logical space of storage for Hashtable.

Before seeing java’s Hashtable in detail you should understand hashing in general. Assume that, v is a value to be stored and k is the key used for storage / retrieval, then h is a hash function where v is stored at h(k) of table. To retrieve a value compute h(k) so that you can directly get the position of v. So in a key-value pair table, you need not sequentially scan through the keys to identify a value.

h(k) is the hashing function and it is used to find the location to store the corresponding value v. h(k) cannot compute to a indefinite space. Storage allocated for a Hashtable is limited within a program. So, the hasing function h(k) should return a number within that allocated spectrum (logical address space).

It is better to have your hashCode() method in your custom objects. String has its own hashCode methode and it computes the hashcode value as below:

Returns a hash code value for the object. This method is supported for the benefit of hashtables such as those provided by java.util.Hashtable.

If you are going to write a custom hashCode(), then follow the following contract:

The general contract of hashCode is: Whenever it is invoked on the same object more than once during an execution of a Java application, the hashCode method must consistently return the same integer, provided no information used in equals comparisons on the object is modified.

The following is to improve performance of the Hashtable.

If two objects are equal according to the equals(Object) method, then calling the hashCode method on each of the two objects must produce the same integer result.

hashCode() guarantees distinct integers by using the internal address of the object.

When we try to restrict the hashing function’s output within the allocated address spectrue limit, there is a possibility of a collision. For two different keys k1 and k2, if we have h(k1) = h(k2), then this is called collision in hashtable. What does this mean, our hashing function directs us store two different values (keys are also different) in the same location. 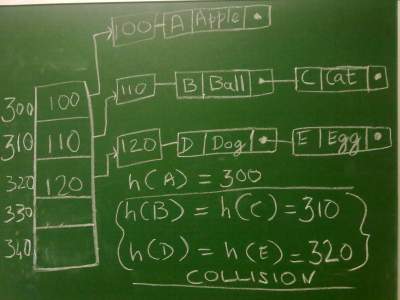 Now when you retrieve a value it will compute the hash code and direct you to a bucket which has two elements. You scan those two elements alone sequentially and compare the keys using their equals() method. When the key mathches you get the respective value. Hope you have got the reason behind the condition that your object must have hashCode() and equals() method.

Java has a private static class Entry inside Hashtable. It is an implementation of a list and you can see there, it stores both the key and value.

To get better performance from your java Hashtable, you need to
1) use the initialCapacity and loadFactor arguments
2) use them wisely
while instantiating a Hashtable.

New capacity in java Hashtable is calculated as follows:

If you give a lesser capacity and loadfactor and often it does the rehash() which will cause you performance issues. Therefore for efficient performance for Hashtable in java, give initialCapacity as 25% extra than you need and loadFactor as 0.75 when you instantiate.

Comments are closed for "Java Hashtable".