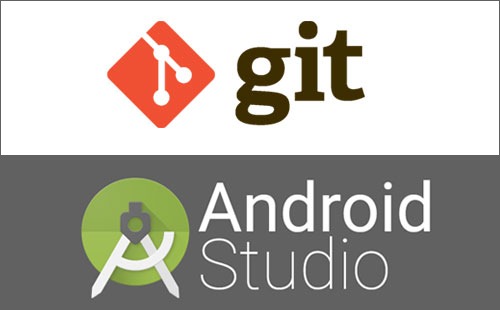 Android studio comes with Git client. All we need to do is just enable and start using it. As a prerequisite, you need to have Git installed in local system. You can download Git from http://git-scm.com/downloads and install it.

If you are an experienced developer, comfortable with Android Studio and Git, then this section summarizes the whole tutorial. For the rest of us, just skip this part and proceed with the detailed steps.

1. Test if Git is Configured

In Android Studio, go to ‘File’ –> ‘Settings’ –> ‘Version Control’ –> ‘Git’. Then click ‘Test’ to ensure that Git is configured properly in Android Studio. 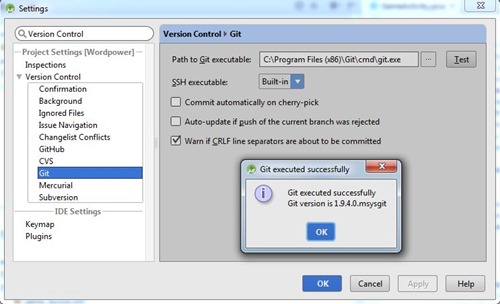 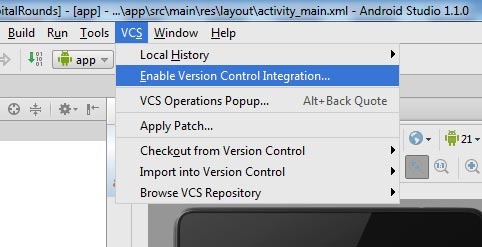 On enable, we will get a dialog window with options to choose like CVS, Git, Mercurial and Subversion. Now in this tutorial, we have take Git as example.

On successful enable the options under VCS menu will change showing the Git options to add, commit, etc. The color of the files in Android Studio project explorer will change to brown from previous black. This indicates that the files are new and yet to be added to Git server. 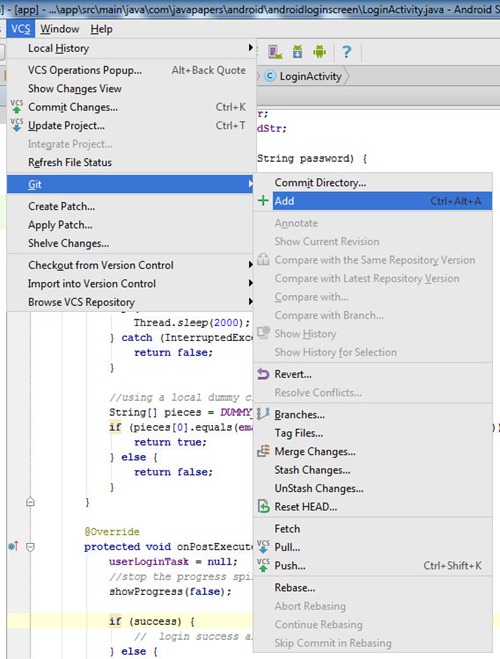 This is an important step before adding the project files to Git version control. We do not want all the files from Android Studio to be added to Git. Files like generated code, binary files (executables) should not be added to Git (version control). Git provides a feature using which we can inform Git that the list of files given should be excluded in version control.

Create a TXT file and name of the file should be “.gitignore”. There is no name for this file and ‘gitignore’ is the extension. Its just a text file with list of file names to be excluded. You can put this file in the project root folder in Android Studio. Following is my .gitignore file for Android projects. Its almost the same for all Android projects.

Now the project is ready to use with Git version control. Now it depends on your choice of the Git server. If you choose to use Git in just your local system (which is highly unlikely), you are all set. Go to “VCS –> Git –> Add” and the files are now added to Git and then you need to commit the changes. Now go to “VCS –> Commit Changes” and you will get a dialog to enter the comments and to commit. Done and the project is added to Git.

GitHub is an online service for project hosing using Git version control. To host the project on Git, a Git account should be created in github.com. Now you can share the Android project on GitHub. Go to “VCS –> Import into Version Control –> Share Project on GitHub” 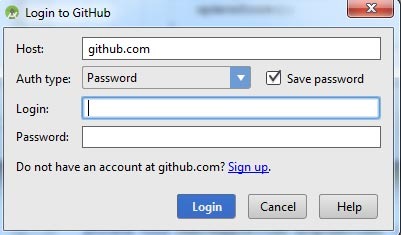 Create a new repository on GitHub and push the project to the GitHub repository. 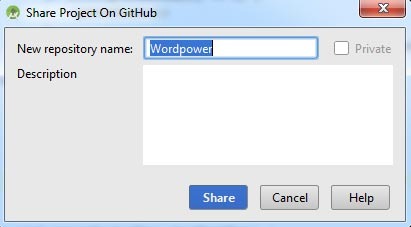 4.3 Git using Bitbucket or Any Repo with Android Studio

Bitbucket does not have a direct import feature as GitHub has. But it is too simple to do. For remote Git repositories like Bitbucket which does not have an explicit import feature in Android Studio, we can use the command line and add the project to the remote repository. This is also applicable if you are in a company network and you have your own remote Git server.

Go to terminal, change to project root in Android Studio and execute the following command. The URL is the Git remote repository.